An English Springer Spaniel named Rosie is being credited with accomplishing something no other man nor beast in the U.K. could do — and that was to locate a 1.14-carat diamond that was dropped from space 4+ months ago as part of a publicity stunt that went awry.

Back in mid-August, we told you about a zany promotion, where a $20,000 cushion-cut diamond was launched into space via helium balloon and then parachuted to earth once the balloon burst under pressure at 100,000 feet.

Online retailer 77 Diamonds planned to give consumers hints as to the whereabouts of the diamond using #diamondinthesky on Twitter. The person who was to eventually find the diamond was allowed to keep it.

Unfortunately, the diamond’s tracking device malfunctioned during the gem’s 150-minute, 60-mile round-trip into space and back again.

The helium balloon had launched from Derbyshire, U.K., but the diamond company was not quite sure where it landed. The company told treasure hunters that the diamond was likely within a five-mile radius of Lea, a small town about 150 miles north of London. 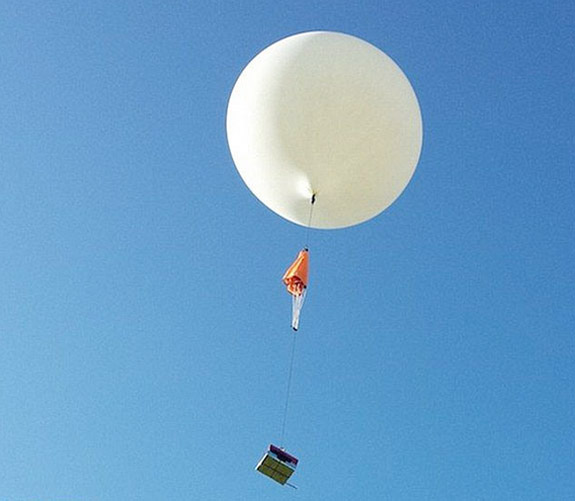 Thousands of people scoured the countryside for weeks, but the diamond — which was safely nestled inside a red foil box and attached to a bright orange parachute — was nowhere to be found. As weeks turned into months, treasure hunters gave up on the search.

And this is where Rosie and her owners, Allan and Pat Bell, rejoin the story. The group was walking along a country path in Brattleby — about 10 miles east of Lea and well outside the presumed drop zone — when Rosie darted under a hedge and dragged out a muddy prize, according to Metro.co.uk.

At first, the Bells didn’t realize exactly what Rosie had found. They left the tangled mess at the side of the path and decided to collect it on the way back. On their walk back, they inspected Rosie’s discovery more carefully.

“I looked a bit closer and saw the package had an orange parachute underneath it and details of who to contact written on it – and I knew it must be the diamond,” the 75-year-old Allan Bell told Metro.co.uk.

Pat Bell added, “I couldn’t believe it when we opened it up. You could have knocked me down with a feather.

The retired truck driver and his wife of 25 years will look to sell the diamond and use the funds to go on a Mediterranean cruise to celebrate their silver wedding anniversary.

Rosie will be rewarded with a rib-eye steak.