For the past few years, we’ve been tracking the odyssey of the ill-fated Bahia Emerald, an 840-pound grey rock seemingly impaled with nine enormous emerald crystals weighing an estimated 180,000 carats. Once valued at nearly $400 million, the specimen has been the subject of an onerous custody battle that recently added a powerful new player — the government of Brazil, which is arguing that the Bahia Emerald was mined and exported illegally. 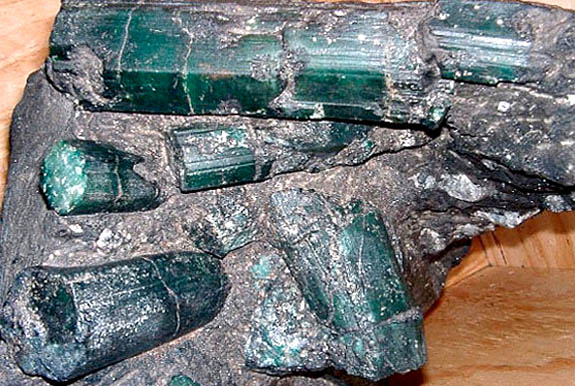 "We're trying to get back what belongs to us," Marconi Costa Melo, a lawyer in Brazil's attorney general's office, told the Los Angeles Times. "The emerald belongs to Brazil."

Unearthed in Bahia, Brazil, in 2001, the rock contains what is considered to be largest and heaviest emeralds ever found. One of the nine crystals in the formation is the thickness of a man’s thigh. 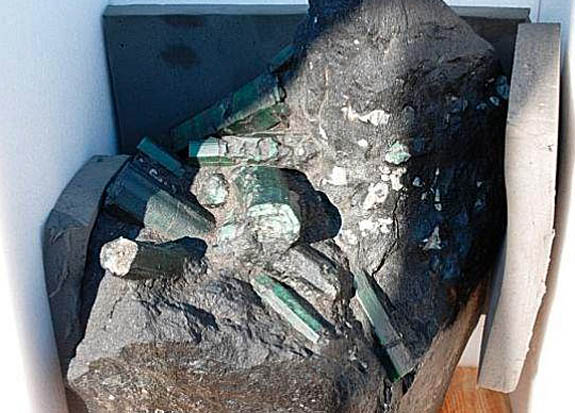 Despite its majesty, the Bahia Emerald has been a magnet for trouble starting the day it was pulled from the remote Bahia Mine and carried out of the rain forest by a team of pack mules.

According to a National Geographic documentary titled, “$400 Million Emerald Mystery,” the mules were attacked and killed by a pair of black panthers, so the hefty Bahia Emerald had to be lugged by a crew of men using a handmade stretcher. 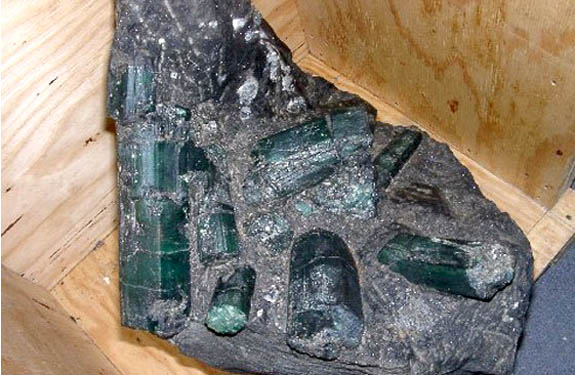 After that incident, no fewer than eight parties have claimed to be the rightful owner of the rock, as it changed hands many times and traveled from Brazil to California to New Orleans, then back to California and then to Las Vegas, where it was eventually seized by police.

For now, the Bahia Emerald awaits its fate in a secured vault at the Los Angeles County Sheriff’s Department. Methodically, the court system has been reviewing the claims and narrowing the field of litigants, some of which agreed to settle their claims with competing parties in return for a cut of possible sale profits, according to the Los Angeles Times. 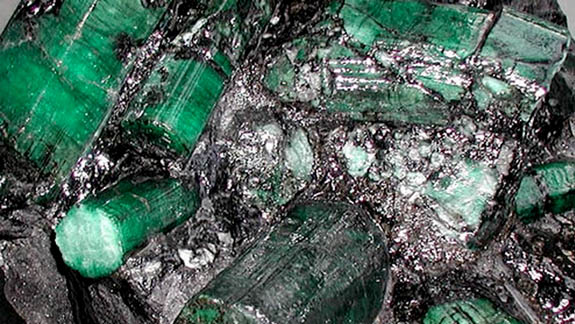 Just as the case was nearing a conclusion, the country of Brazil added a surprising new twist to the saga when it asked the court to set aside all other claims and consider it the sole and rightful owner of the Bahia Emerald.

Brazil’s argument: the specimen was illegally mined on Brazilian land and exported without the authority of the Brazilian government. Hence, the Bahia Emerald has immense cultural and scientific value, belongs to the people of Brazil, and should be on display for all to see.

"We discovered that there was no authorization for the extraction of the emerald, no state permission to transport it or to export the emerald," Melo told the Los Angeles Times.

A group led by Idaho businessman Kit Morrison is the only other party left in the legal case. Morrison’s attorney, Andrew Spielberger, told the Los Angeles Times that Brazil waited too long to make a claim.

"Five years of litigation, then all of a sudden at the end of all this a governmental entity says that they want to take it and repatriate it," he said. "If the country of Brazil is interested in buying it from [Morrison] and taking it back to put it on display — we see the value in that."

Countered John Nadolenco, Brazil’s Los Angeles-based attorney, “Brazil does not need to buy it from anyone. The Bahia [Emerald] simply needs to be returned to its rightful home."

And so the odyssey of the Bahia Emerald will continue for a bit longer. A hearing on the motion by the nation of Brazil was scheduled for this week, and a Los Angeles Superior Court judge is set to hear more testimony from Morrison’s group on May 11. Stay tuned…