An Aussie prospector struck it rich when his metal detector pinpointed the location of an 87-ounce gold nugget that was buried barely six inches under the surface near the famous gold-bearing town of Wedderburn in Central Victoria.

The “Fair Dinkum” nugget has a precious metal value of nearly $102,000, but 42-year-old Mick Brown from Kerang, Australia, believes his nugget will be worth twice that much to the right collector.

"Sometimes they do say, “Gold is worth twice its weight in gold if it's a really nice looking nugget,’" he told The Age. 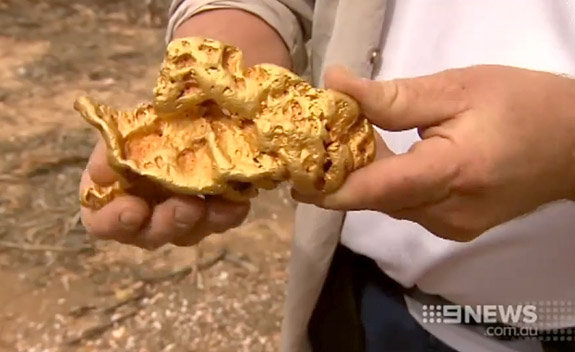 Brown is confident his nugget will earn top dollar. “It’s got good grooves and moves,” he said.

In October 2014, a 97-ounce gold nugget found with a metal detector in Northern California’s fabled Gold Rush Country was sold to an anonymous buyer for $400,000.

Gold prospectors like to name their memorable finds, and Brown is no exception. He’s calling his nugget “Fair Dinkum,” an Aussie term that means “for real.”

Brown told The Age that when people feel its weight they say, "Fair dinkum this is huge.”

The lucky Aussie must thank his wife for encouraging him to get out of the house on the day he found the nugget. According to Brown’s account in The Age, he was irritable because he was a couple of weeks into giving up smoking. His wife advised him to leave the house for some fresh air. He ended up traveling 64 miles south to Wedderburn — a location he had prospected before. 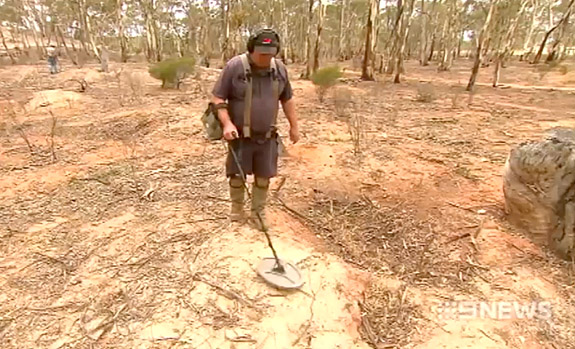 Brown described how his metal detector reacted to the huge chunk of gold in the ground. “That just blew me ears off, as you can imagine,” he said, referring to the alert signal from the device. 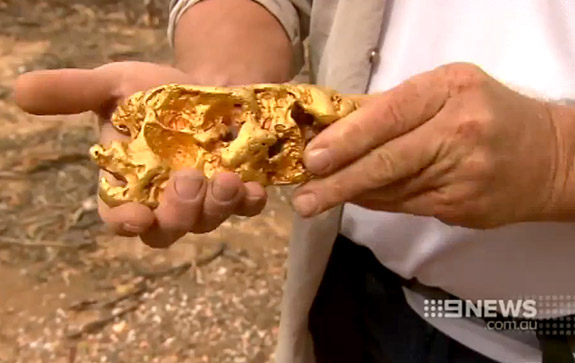 After digging down only about six inches, he was able to grab onto the horn-like protrusions of the “Fair Dinkum” nugget and pulled it from the ground.

At first he thought it was a big blob of copper, but then he realized it was gold. He “cracked a can” (drank a beer) to celebrate.

Brown did not reveal the exact location of his find for fear of starting a gold rush. He wasn’t shy, however, about showing off the “Fair Dinkum” nugget.

Brown reported that with the money earned from the sale of the nugget he will purchase a home spa for his wife and four daughters.

Despite his big payday, Brown is still motivated to bring home an even bigger nugget one day. "There are some big 10 kilo jobs out there," he said.

Brown’s “Fair Dinkum” — although sizeable — is far from the largest nugget to emerge from the Aussie countryside. In 1981, the 256-ounce “Pride of Australia” was unearthed nearby in Mosquito Gully, just north of Wedderburn.